GET TO KNOW OUR

About our Board of Directors.

The role of our Board of Directors is to support businesses in Cloverdale and represent the interests of our members. Our Board of Directors is voted upon by our members. Our Board members are volunteers who give their time and share their expertise to help better our local business community. We sincerely appreciate all of their dedication and hard work.

Scroll to view all of our dedicated Cloverdale District Chamber of Commerce Board of Directors. 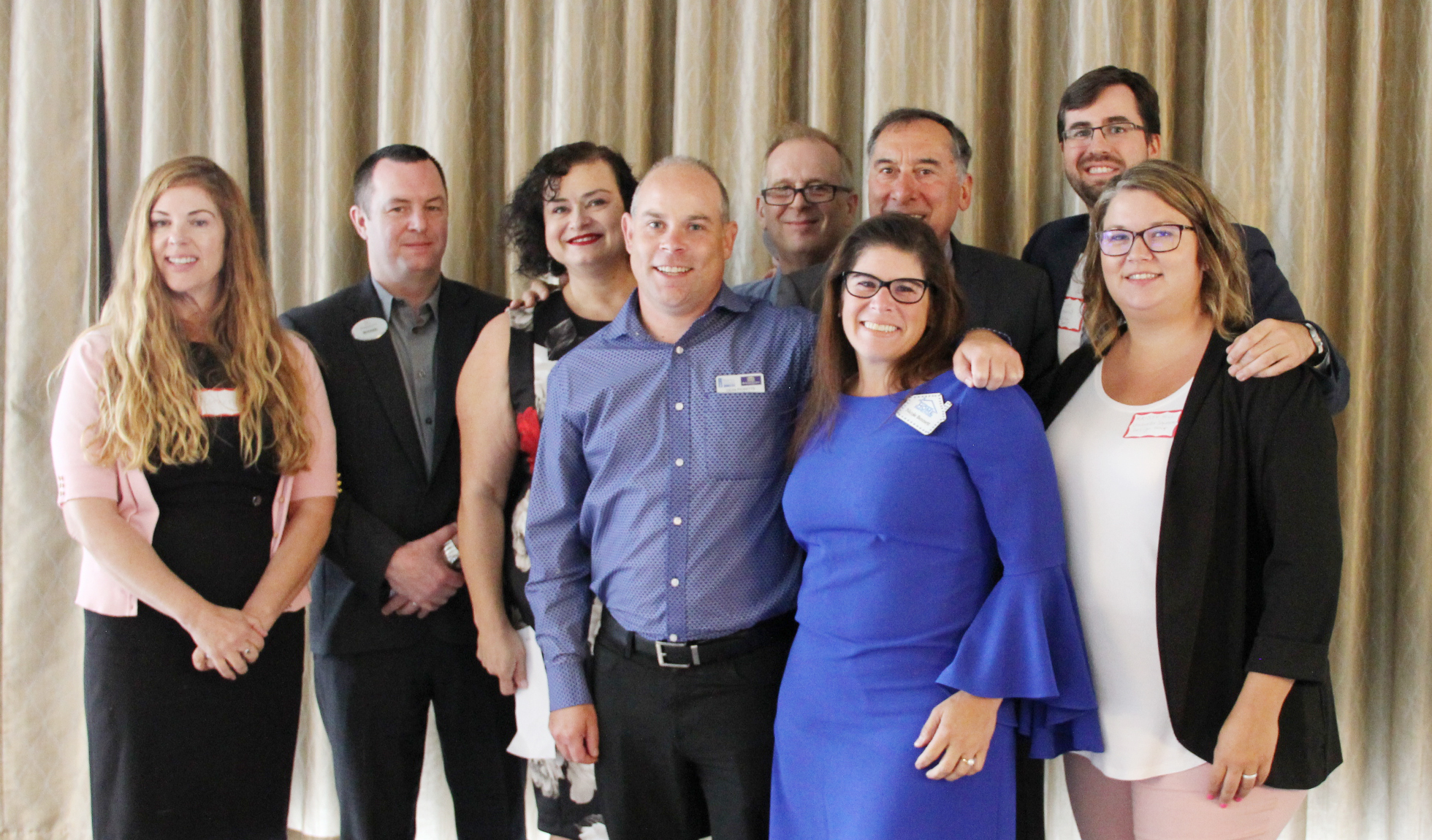 Our Board of Directors

Tyler is currently a practicing lawyer with the local Cloverdale firm of MacMillan, Tucker and Mackay, having been with the firm since 2016.

He completed his studies at Dalhousie University (2009), Brock University (2012), the University of Kent (2014) and UBC (2015) before completing his articling training under George Gunnink and then remained with the firm as an associate. His practice is focused on real estate, wills and estates, and corporate and commercial matters.

Having studied around the world, and called Ontario home, Tyler has had the opportunity to experience many different communities and become involved with many local organizations. When looking to begin his practice he intentionally sought a location that offers not only opportunity for a young individual just starting out, but also encompassed a sense of community. This is what he found in Cloverdale and specifically with the Chamber of Commerce.

Jennifer is the co-founder and owner of DFC Events, a full service event and special event planning company

Jennifer has over 20 years of sales, marketing and management experience. Event management and marketing was a natural fit with Jennifer’s work and volunteer experience. She has a passion for working with non-profit organizations. That passion started early when she volunteered with her family at various disabled sporting events.

Jennifer loves travel and new experiences, grateful she has had the opportunities to visit several cities and countries. And, like her business partner, Shannon, Jennifer enjoys collaborating with clients on their events, helping them reach their fundraising or corporate goals.

Rebecca is also a small business owner, long-time local activist and advocate. She has a multifaceted professional background with over 20 years of serving the not-for-profit world and fortune 500 companies. Rebecca earned her Bachelor of Arts Degree in Political Science, is certified in Public Relations, Financial Planning and also pursued her Master’s degree in Business Administration.

Deeply committed to the community she lives in, and a resident of the area for over 34 years Rebecca has always believed in service, standing up, speaking up, and participating.

Subeg Grewal is a Manager with HWG, Chartered Professsional Accountants.

Born and raised in Surrey, Subeg attended the University of the Fraser Valley and graduated with a Bachelors of Business Administration in Accounting. He received his CPA designation in 2016 after gaining experience working in a big four accounting firm. Subeg now works in the heart of Cloverdale at HWG, Chartered Professional Accoun­tants. HWG has been providing accounting and tax services in the Cloverdale area for over 50 years.

Subeg enjoys playing hockey and football in his spare time. He enjoys traveling and has visited more than 25 countries and counting.

Nicole started in career in Scotia Bank as Personal Banking Officer and a Mutual Funds Investment Advisor. She decided to leave the bank to work as a Registered Behavioral Therapist in the Surrey school system.

After 12 years working within this industry, Nicole decided to put her time and effort into the family business.Nicole believes in providing her clients with a high level of customer service and takes pride in ensuring that when you call in, you are taken care of from the first phone call to the day you take possession of your new home.

Nicole has fostered children for 30 years off and on and off, coached community ball and soccer, volunteered with Autism Speaks, and several other community programs. When she has some spare time, Nicole loves hiking, playing and watching sports, spending time with her family and friends, cooking and enjoying a glass of red wine.

Andrew has been a Realtor® with the Katronis Real Estate Team for the past 12 years. He is an expert is the real estate market in the Cloverdale,Langley and South Surrey areas. An entrepreneur by nature, Andrew knew his career was destined to be in business. Right out of high school, Andrew got a job and for the next year he studied in the evenings to complete the licensing requirements to become a Realtor® at the earliest age possible – 19!

Andrew loves investing and revels in the business examples from the likes of Richard Branson and Winston Churchill. At the age of 20, Andrew bought his first property and hasn’t looked back.

Born and raised in Cloverdale, Andrew believes his strong work ethic and perseverance comes from his mother’s hardworking family. He remembers the stories of his Dutch grandfather who arrived in Vancouver knowing little English and his stamina for not giving up and working until he got the job done.

Amit is the co-founder and director of two local rehabilitation providers: Life Skills Therapy and Neurofunction Rehab. He has been practicing occu­pational therapy for over 22 years. Amit has worked extensively with clients with brain injuries and orthopaedic conditions in various countries including Canada, Ireland, Kuwait, and India. He is certified in Neuro Developmental Therapy and trained in Dementia Care Mapping. Amit holds a certificate in Integrated Disability Management, and is a certified PGAP provider. Amit has completed International Yoga Teachers Training course, and is able to combine this knowledge with occupational therapy to holistically treat clients suffering pain and illness.

Amit has always been a respected member of the industry, and enjoys mentoring. He has been recognized by Canadian Association of Occupation­al Therapists – British Columbia (CAOT-BC) for his outstanding contribution toward advancement of occupational therapy profession. Amit is committed to health promotion in the community through his voluntary lectures and workshops. He is passionate about promoting community participation in stroke survivors, and developing cost effective therapy solutions for those who cannot afford expensive treatment. Amit currently serves as a member of Professional Advisory Committee of Stroke Recovery Association of British Columbia. He is truly dedicated to building a strong and healthy BC community.

Under Amit’s leadership, Life Skills Therapy was declared winner of Surrey Business Excellence Award in 2013. As the founder-director of Life skills Therapy and Neurofunction Rehab, Amit is responsible for strategic planning, business de­velopment, and operational management. In his free time, Amit enjoys capturing the stunning landscapes of our beautiful province.

Cam is the Sales Director for Servcomm Communications Ltd. a company focused on the communications business, specialising in installation and maintenance of Avaya, Mitel, Samsung, NEC & Panasonic systems and peripherals.

Cam has many years of experience in business, sales, and customer service. His diverse background and experience allows him to best meet the business goals of his clients.

Cam is passionate about customer service and serving his community and is thrilled to be serving as a Director of the Cloverdale District Chamber of Commerce.

Before founding Uptown Business Machines, Adam was Agent owner for Xerox on Vancouver Island, has held Xerox management and major account roles both in Canada & the USA as well as major account roles for Pitney Bowes. As a business owner Adam knows the importance of our local business community and is an active chamber member. Adam is the immediate Past President of the South Surrey & White Rock Chamber, having served for many years with various roles and committees.

Paul has been the Executive Director of the Cloverdale Business Improvement Association for the past ten years. Prior to this, he has many years of experience in marketing and business development.

Paul is a strong supporter of our community. He has played an integral role in many great events in Cloverdale including the Cloverdale Rodeo Parade, Surrey Santa Parade, Blueberry Festival, Blueberry Fest Show N Shine, Cloverdale Chili Cook off, and Halloween Costume Parade. He also created “Heads Up Alert” for email messaging that BIA members can send in suspicious behaviour notice or recent criminal activity they have experienced.

Dean is a mortgage broker at Blue Tree Mortgages.

He has over 10 years experience and prides himself in providing the right financing solution for his clients. Whether First Time Home Buyer, Real Estate Investment Purchase, Credit Challenged, Commercial Purchase, Construction Loan or Private Loan the options are endless and the number of Lenders continue to grow! He will work together on a mortgage plan that fits his clients’ financial goals as well as lifestyle needs.

He joined the Board of Directors of the Cloverdale District Chamber of Commerce to make a difference in our local community.

Coreen is the Executive Director of  the Surrey Association for Community Living, a non-profit organization that provides support services for children and adults with developmental disabilities.

In 2015, Coreen was the recipient of a Surrey Board of Trade’s Surrey Women in Business Award. Her philosophy is to lead by example and empower people to feel confident in their abilities. Her goal is to he strives to break down barriers and search for new opportunities.

Coreen is passionate about bettering our community through making opportunities accessible to all.

Gary attended the Veterinary Medicine program at the University of Guelph and holds a certificate in Fine Arts from Capilano University.

He worked for a number of years at National Cash Register as a graphics de­signer where he received a certificate of achievement award. He spent several years volunteering and working at the Royal Ontario Museum in their Entomol­ogy department as well as volunteering with the Greater Toronto Zoo. He spent several years in the Queens Guards, escort for the Royal Family and achieved the rank of Captain.

When he moved to BC Gary started the very successful Eagle Frames company which was Canada’s first metal frame production company. At that same time he owned one of the largest Arabian horse farms in southern BC. Following some personal set backs Gary went on to form and run the Pacific Artists’ Studio in downtown Vancouver. This successful studio, the first of its kind in BC, was the starting ground for much of BC’s arts culture, frequently visited by artists such as Toni Onley, Jack Shadbolt, Ken Wessman, Jack Darkus, Bill Reid, Graham Harrop, Michael McKinnel.

Gary Oliver also is in the City of Vancouver historical archives twice – once for winning an award for the Preservation of Historical art. Gary mounted a successful campaign to save one of the largest indoor murals in Canada. The second for saving a woman from a burning building.

Gary went on from there to start Cinema_zoo. The first animal agency in Canada, humanely training and supplying ani­mals for the film, TV and still photography business. Gary developed Cinemazoo over 27 years and has to many credits to list but the Telus ads, the movie I am Legend, and the TV show X-Files are but a few. Out of Cinemazoo Gary founded Urban Safari Rescue Society where he is now the director of animal welfare and public education. A biography of Gary Oliver’s life can be found in Chapter’s and other book stores.

Recently, Gary has also served as Treasurer for the Cloverdale Chamber of Commerce and is a member of the Board of Directors for the Surrey Museum.

We will start to take applications for board members in July and August. Interested board members will be presented to the membership and voted on at the annual AGM in September. Please contact us if you are interested in getting involved.

The Cloverdale District Chamber of Commerce is governed by a set of bylaws, voted by our membership. To learn what our bylaws are, please select the download button here to review.